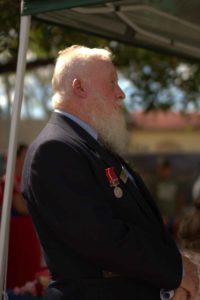 There was a better attendance than expected at the March meeting. It was attended by seven members, three Ladies Auxiliary and two apologies. This was a great turn out for us, but as we had not received RSVP’s from all attendees so we had only arranged to the meeting as an “info only” session.  The session was quite social and it was great to see the interaction.

Unfortunately, we lost our dear friend and long-time member Ossie Apps in March.  We attended the Funeral and Poppy Service for Ossie Apps on 10th March, this was well attended.   Our thanks to Ros strongman for her excellent poppy service.

The District Meeting was held at Tewantin on 21st March.   I also attended the RSL presidents Master Class at Kawana RSL on 20th March.

Cyclone Debbie tore through the Yandina area at the end of March. The cyclone resulted in the downing power lines and damage to properties.  Power was disrupted for three to four days in the area for many.   This impacted on our Cenotaph and the surrounding area, uprooting trees and causing quite a bit of damage. The flagpole was bent by a fallen tree and was luckily able to be replaced in time for the Service.  We commended the Sunshine Coast Council and their contractors for their excellent and expedient work removing the downed trees and repairing the park in time for Anzac Day.

The secretary emailed the members a number of times to help with little response.    Badge and Memorabilia sales commenced on 18th April and ceased on 25th April, stalls at Nambour Hospital, IGA Yandina and Eumundi Markets.   With the reduced number of volunteers this year, our takings were down but still respectable.  My thanks all the volunteers that supported our stalls, in particular a huge thanks go to Bob Long and Dawn Barnett for filling in the blank spaces, and stepping up to cover last minute cancellations. Dawn volunteered 33 hours during this period.

Anzac Day was a busy day starting with representing the RSL at the Dawn Service 0530 at Veradale.

0700 at Eumundi collecting donations with the Imperial Hotels sausage sizzle.

The service concluded a just before 1200.

It was good to have a chance to mingle crowd, one ex-serviceman I spoke to was in Darwin for the first bombing raid by the Japanese, an interesting man.

The setup, pack up and return of equipment was really quick and easy thanks to the Yandina men’s shed.

A great lunch was arranged back at the RSL after 1200, well done to the auxiliary members for a such an excellent meal with a small but dynamic team.

There were a lot of visitors and volunteers that stayed talking at the RSL for longer than normal, it was good to hear the stories they were sharing.

We drew the raffle that Auxiliary had put together. There was a bit of last minute interest, especially with such terrific prizes such as the helicopter ride, courtesy of Bluetongue Helicopters.   A family pass to the ginger Factory.   A statue The Spirit of Gallipoli Landing, which was donated by the RSL Sub Branch.

There were two new Auxiliary members signed up on the day and someone else that we will get back in touch with.

We got quite a lot of engagement across the website, social media and additionally with the pictures being included in the local paper.

There was a wonderful community spirit and great support from those involved in the service on the day.

Joe Herman sent me an email with apologies for not attending the Anzac Day Service as he was away in Brisbane. This was the first service he had missed in 10 years. Joe was following what we have done via email/internet and commended all concerned for their great work! As a long-term member, he stated that it looked more impressive than the previous years with the crowd and engagement.

I was deeply touched by his feedback and responded accordingly.

Thank you emails have gone out to our supporters in the community and the summary of the day is on the website and has been shared with our members.