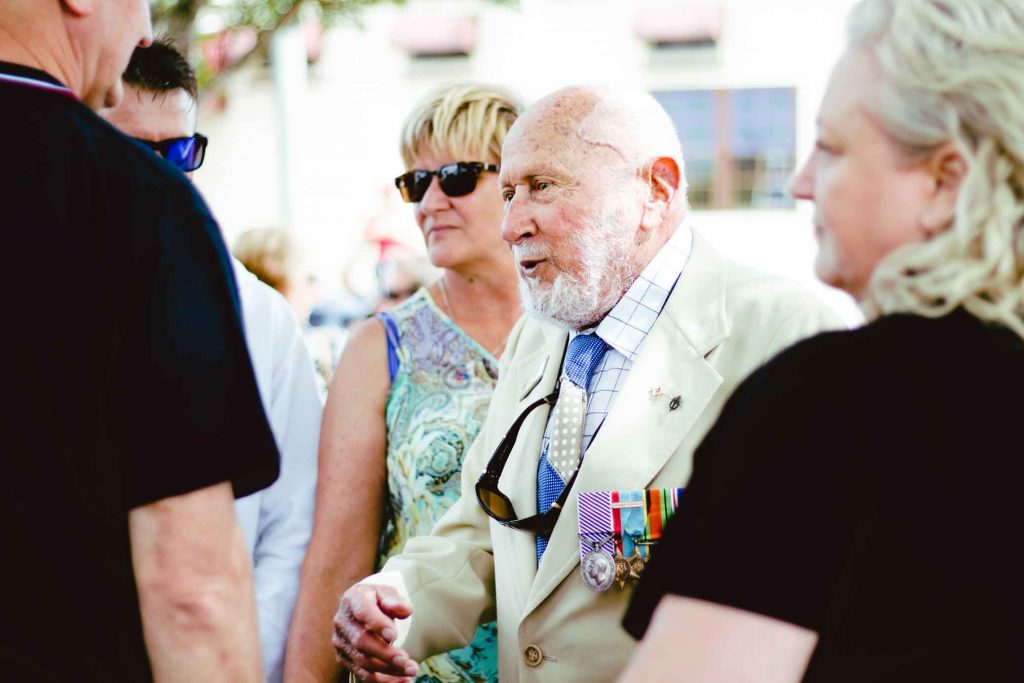 WWII gunner: End of the man they could not kill

DUSTY Miller was a rarity – a World War Two Lancaster wireless air gunner who lived to become an old man.

WAGs like Dusty, hunched in a perspex turret at the back of the bombers, were prime targets for the enemy fire that rained on the aircraft during counter attacks over Germany.

But he made it through an incredible 30 raids over Germany, and survived two plane crashes to come home and live a long and full life, dying at home at Nambour earlier this week aged 92.

RAAF Association of the Sunshine Coast chairman Graham Burgoyne said Dusty once explained that a good healthy sense of fear had helped him survive.

“There was a team of seven people on the Lancaster and he said every one of them was absolutely terrified every time they went up so you just had to get through it. You didn’t have any option,” he said.

Born William Edwin Miller, Dusty, as he was nicknamed because of his surname, grew up in Brisbane but was soon off to England with the RAAF in World War Two.

He was sent to a training unit at Silverstone, now a motor racing hub, and trained in a twin-engined Wellington before graduating to a Manchester, the same size and shape as the Lancasters used for most of the bombing in Germany.

Dusty was on board during two fiery Wellington crashes.

“I was the only one who walked out of it alive one time. It wasn’t very pleasant stuff,” he said in an interview the the Sunshine Coast Daily’s Life and Style magazine earlier this year.

The memory of men like him who did not return after flights stayed with him all of his life.

“When we got back from a raid, we were in quite a mess and shook up. We weren’t in very good health but the intelligence people had to know where the fighters were.

“Because we were in such a mess, we were told to have a few drinks and smoke a few cigarettes… to sort ourselves out before we had to tell them where the enemy was. It’s different to today with post-traumatic stress.”

A recipient of the Distinguished Flying Medal, Dusty, was held in high regard not only for his war record but the way he conducted himself in civilian life.

He was married to Lorna for 68 years, a father of four and grandfather of four, and a Legacy volunteer for more than 50 years.

Graham Burgoyne, president of the RAAF Association of Nambour, said Dusty was “one of those amazing people” who was happy to help where he could and “never stopped”.

“He was a real character. Three or four months ago, he did a day trip to Antarctica in an aircraft.”

“His wife died two years ago and he’s never stopped since then.”

Mr Burgoyne said Dusty had a knack for stories and talking to people.

“He was a real trick. He was quite clever with words. Not last year, but the year before, at a Bomber Command service at Amberley airbase, he gave a speech and he had everybody in fits of laughter,” he said.

“He had a really good sense of humour and was able to tell the stories quite well.”

Wally Farquhar, chairman of the Sunshine Coast Legacy group, said Dusty described Dusty as a “grandfather” of the movement and mentor.

“He was of great assistance to me. Whenever I ran across matters that I didn’t know about, he was able to be consulted and was very helpful in that regard,” Mr Farquhar said.

The Yandina-Eumundi RSL patron made a point of passing on his stories and knowledge to younger generations.

“He really put a lot of store in the kids of Yandina State School. He used to go and talk to them and was well regarded by the teachers there,” Mr Farquhar said.

Dusty’s storytelling had been curtailed of late by illness.

Although he was keen on going to the gym, he had lung problems, which he had put down to gases inhaled during plane crashes, and had recently been hospitalised with respiratory problems.

His funeral was held on Friday and was followed by a wake at the Yandina-Eumundi RSL at which his mates told his stories for him.

Dusty Miller did a series of short interviews with Paul Nicholas which were published online in 2014 and 2015.

On being struck by another Lancaster on the starboard fin and rudder, and scarped on the rear turret:

“We didn’t consider that was enough good reason to turn around and go home. We would have had to get somewhere to drop our bombs. It would have been suicide to land with a load of bombs.

“We pressed on. The pilot, he did a tremendous job. We went to the south of England, bombed the target and got home and then we couldn’t… we lost all our aerials and when this other plane hit us – we never heard what happened to him – we couldn’t call up….

“You couldn’t much around too long. everything was worked out fairly precisely. you didn’t have a lot of spare juice like they do in planes today.

“We just went straight in and landed because we couldn’t caught up and by the time we got to the end of the runway without that fin and rudder we couldn’t turn off, and the next minute a Jeep came, screaming out and started ranting and raving and carrying on.

“I was first out of the plane… he came up on the good side… turned out later on he was the CO. But being night time, I couldn’t see who it was, and he was yelling and screaming… I was going to give back as much at him as he was yelling at me. I didn’t realise he was a CO.

“We had to be towed out… All the pilot got for recognition was a green endorsement in his log book for doing a good job.”

“…In my light-hearted way and flippant thing that’s kept me going and helped me live so long, when the Silverstone name comes up up, I say, ‘Oh yeah, I’ve crashed at Silverstone,’ letting people sort of think I was in motor racing but we crashed twice in Wellington bombers…”

“… motor had caught fire, we were too low to jump out and we crashed and the flames were upfront and I was in the rear turret and the fellows upfront were engulfed in the flames but because I was down the back and I managed to rotate the turret around to the side and throw myself out backwards, that’s how is survived and other fellows didn’t.”

On a second crash:

“A few weeks later, I was back in the air again in another Wellington again. This is before we had been crewed up. We were doing a gunnery exercise and again the motor caught fire. We crashed and the fire stayed more with the starboard engine. All the escape places didn’t operate too well and anyway, the pilot had a hatch above his seat and he helped us all out, and he got out, and we all ran a few yards and laid flat so that when the plane did explode eventually and ammo was flying everywhere, but by doing that, the blast sort of went over us and we all survived.”

This story was written by Janine Hill, we are truly grateful to Janine for honouring our Patron and friend Dusty Miller with this tribute.

The complete story can be seen here –  http://www.sunshinecoastdaily.com.au/news/wwii-gunner-end-of-the-man-they-could-not-kill/3073379/