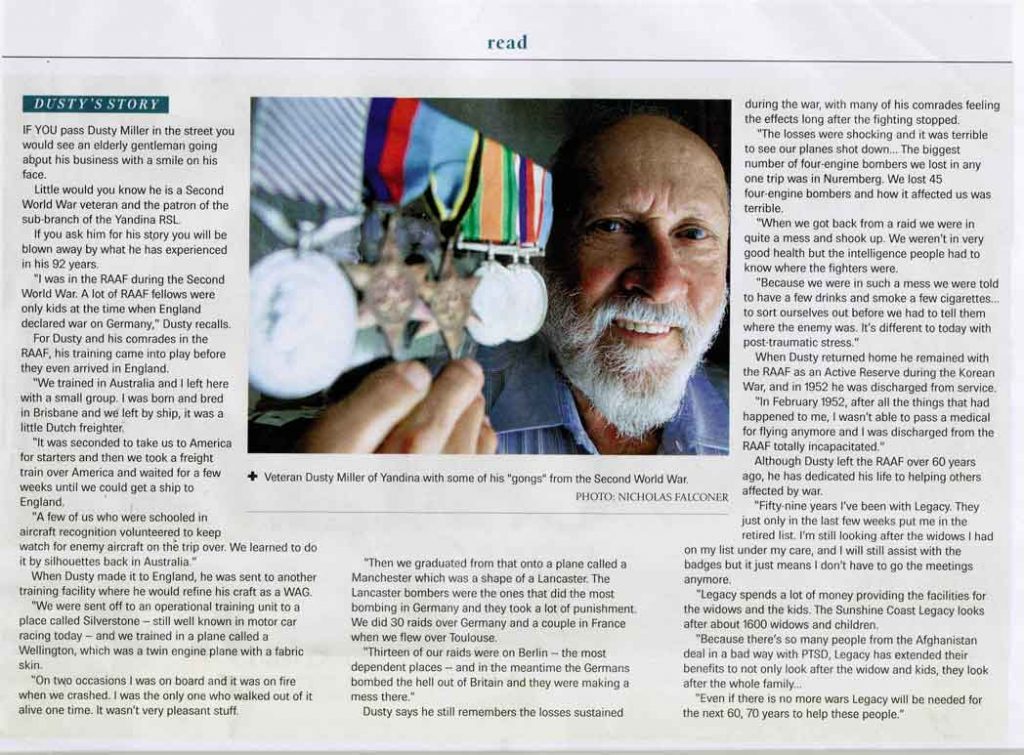 IF YOU pass Dusty Miller in the street you would see an elderly gentleman going about his business with a smile on his face.

Little would you know he is a Second World War veteran and the patron of the sub-branch of the Yandina RSL.

If you ask him for his story you will be blown away by what he has experienced in his 92 years.

“I was in the RAAF during the Second World War. A lot of RAAF fellows were only kids at the time when England declared war on Germany,” Dusty recalls.

For Dusty and his comrades in the RAAF, his training came into play before they even arrived in England.

“We trained in Australia and I left here with a small group. I was born and bred in Brisbane and we left by ship, it was a little Dutch freighter.”

“It was seconded to take us to America for starters and then we took a freight train over America and waited for a few weeks until we could get a ship to England.”

“A few of us who were schooled in aircraft recognition volunteered to keep watch for enemy aircraft on the trip over. We learned to do it by silhouettes back in Australia.”

When Dusty made it to England, he has sent to another training facility where he would refine his craft as a WAG.

“We were sent off to an operational training unit to a place called Silverstone – still well known in motor car racing today – and we trained in a plane called a Wellington, which was a twin-engine plane with a fabric skin.

“On two occasions I was on board and it was on fire when we crashed. I was the only one who walked out of it alive one time. It wasn’t very pleasant stuff.”

“Then we graduated from that onto a place called a Manchester which was a shape of a Lancaster. The Lancaster bombers were the one that did the most bombing in Germany and they took a lot of punishment. We did 30 raids over Germany and a couple in France when we flew over Toulouse.

“Thirteen of our raids were on Berlin – the most dependent places – and in the meantime, the Germans bombed the hell out of Britain and they were making a mess there”.

Dusty says he still remembers the losses sustained during the war, with many of his comrades feeling the effects long after the fighting stopped.

“When we got back from a raid we were in quite a mess and shook up. We weren’t in very good health but the intelligence people had to know where the fighters were.

“Because we were in such a mess we were told to have a few drinks and smoke a few cigarettes…to sort ourselves out before we had to tell them where the enemy was. It’s different to today with post-traumatic stress.”

When Dusty returned home he remained with the RAAF as an Active Reserve during the Korean War, and in 1952 he was discharged from service.

“In February 1952, after all the things that had happened to me, I wasn’t able to pass a medical for flying anymore and I was discharged from the RAAF totally incapacitated.”

Although Dusty left the RAAF over 60 years ago, he has dedicated his life to helping others affected by war.

“Fifty-nine years I’ve been with Legacy. They just only in the last few weeks put me in the retired list. I’m still looking after the widows I had on my list under my care, and I will still assist with the badges but it means I don’t have to go to the meetings anymore.”

“Legacy spends a lot of money providing the facilities for the widows and the kids. The Sunshine Coast legacy looks after about 1600 widows and children.

“Because there’s so many people from Afghanistan deal in a bad way with PTSD, Legacy has extended their benefits to not only look after the widow and kids, they look after the whole family…

“Even if there are no more wars Legacy will be needed for the next 60, 70 years to help these people.”

Dusty’s Story was written by Sarah Rex, Sunshine Coast Daily, for the Anzac Day feature 2016. We are grateful for the supply of this article to share about William “Dusty” Miller.

Sadly, Dusty Miller passed away on the 31st of July 2016. We are grateful that we are able to share this story of truly amazing man who touched the lives of so many.