Our guest speaker was our own RSL Patron, Mr Dusty Miller, a World War II veteran, who served at Bomber Command during his enlistment in the RAAF.

Dusty joined the RSL in 1945 and has been a member of the Yandina RSL for over 35 years. This humble man is well known for his tireless work supporting and educating others in the local community. Dusty has been featured a numerous times in the press and in books over the years.

The experience and insights of Dusty’s speech provided a wonderful tribute and such a different perspective from a different era.

We should treasure the stories that are shared so authentically. Dusty is a true gentleman with a lifetime of experience that is now known by just a few remaining heroes from a time long since past.

It was an absolute honour to have Dusty speak on such a special day and we are truly grateful. 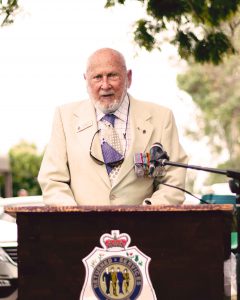 Last year we gathered to commemorate one hundred years since the landings at Gallipoli, when more than 26,000 Australians became casualties of war, and 8,141 made the ultimate sacrifice.

Gallipoli is said to be where the ANZAC spirit of courage, loyalty and mateship was borne.

The place where both Australia and New Zealand fought side by side to maintain the freedom of the two ANZAC nations – but in addition to that, the events that occurred on those foreign shores one-hundred-and-one years ago united our nation in honour, respect and commemoration. The events were so significant that within a year of their occurrence, a memorial was being planned.

World War I was a global war which took place primarily in Europe from 1914 to 1918, to which 40 million casualties resulted. It was in August 1914 that Germany declared war and attacked France on the west and Russia on the east. The immediate cause of the war was the assassination in 1914 of Archduke Franz Ferdinand, heir to the Austro-Hungarian throne by Gavrilo Princip, a Bosnian Serb citizen of Austria Hungary and a member of the Black Hand. The retaliation against the king of Serbia activated a series of alliances that set off a chain reaction of war declarations – within a month, much of Europe was in a state of open warfare.

There was a line of trenches about 550 kilometres long stretching from the North Sea down to Switzerland, known as the Western Front. Neither army was able to advance and the solders were being killed without either side appearing to be winning the war. Britain started looking for a way around this line. as the only way to get there was via the Mediterranean. This sea route had been cut from Britain to Russia by Turkey. Turkey entered the war on Germany’s side. Russia was losing to the Germans, and it was necessary for Britain and France to send support.

Initially, Britain sent a large fleet of ships to attack Turkey at the straits that ran through the north of their country. The Turks had built forts along the sides of the straits, and laid mines between the shores. The Allied Naval Force attacked several times, but after 700 men were killed and 3 ships sank in one day in March 1915, they did not try again. After this, it was decided to land a force of soldiers on the Gallipoli Peninsula on the northern side of the strait in order to capture it, then march on Constantinople, the Turkish Capital; by doing this they could open the sea route to Russia again.

Unfortunately, plans of the operation were not kept secure, and the Turkish command knew the attack was coming. The Allied forces attacked the beaches at dawn on April 25th in 1915.

They came ashore in small boats, some landing in the wrong place, many were killed in the water or on the beach, others managed to climb up the steep cliffs, which forced the Turkish soldiers away from the beach as they fought their way inland. The Turks then counterattacked the ANZACs. They faced each other on ridge lines dug about a mile from the beach. There they stayed for eight months, until the British command finally accepted there was going to be no victory at Gallipoli.

By sunrise on December 20, 1915, there were no more ANZACs left at at ANZAC Cove, Gallipoli. The Gallipoli landing could now be considered one of the worst military disasters of the 20th Century. At Gallipoli, 8,700 Australian and 2,700 New Zealand lives were lost – and in the years following Gallipoli, another 45,000 Australians were lost in the Western Front. However, this day, the 25th if April, 1915 remains one of the costliest and most unnecessary days in Australia’s military history and has been chosen to be Australia’s military commemorative day.

This year, we gather together to mark the one-hundredth ANZAC Day. Every year for the last one hundred years, we have stood as a nation, beside our neighbours in New Zealand, and honoured not only those who stepped foot on the ground at Gallipoli, but every single person who has served in the defence of our country before and since that fateful day.

Over the past one hundred years, 1.5 million Australians have served our great nation, and more than 102,000 men and women have given their lives for our freedom.

We acknowledge their loss.

We acknowledge their courage.

We acknowledge their endurance, their mateship, their love of country and their good humour.

These are the hallmarks of Australian service men and women, past and present.

To them we express our gratitude, our love, and our promise that we will remember them.

This promise extends beyond honouring the lives and deaths of those who have gone before us.